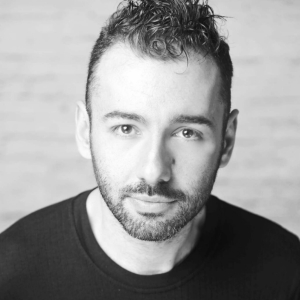 Manfredi  is an actor and a flamenco dancer.

He also deals with direction and choreography assistance. He lives in Rome and works in Italy, England and Spain.

He studied acting at The Actors Centre in London-Covent Garden and in Italy.

He won in 2007 by audition a ​​scholarship for the workshop held by acting coaches  Ilza Prestinari and Jack Haller, members of the Actors Centre in New York.

He has performed in major Italian Theatres  from North to South with professional  theatre companies.

He moved to Seville between 2003 and 2006 to study and practice Flamenco in best Seville’s flamenco  academies.

Between 2011 and 2013 Manfredi staged “Caravaggio the passion,” a personal vision of Caravaggio told between theatre, music and  flamenco dance staged in Prato (Tuscany), In Rome and in Spain at  Campos Eliseos Theatre in Bilbao and Gaztambide Theatre in Tudela (Navarra).

He began to collaborate with the international flamenco dancer  Karen Lugo, revelation and winner of the International Dance Festival of Almeria, in the show he wrote and directed “Frida Kahlo bailando a la vida” premiered in Rome in March 2012.

Since 2008 he moved to London where he performed as a Soloist and Terpsichore at :

Sadlers Wells London Flamenco Festival  in Eva Yerbabuena ‘s  “Lluvia”,  in “Carmen”  as actor and dancer directed by Francesca Zambello at the Royal Opera House Covent Garden, at the International Dance Festival Birmingham 2010 and at Peacock Theatre in “Flamenco Spectacular” by Nuria Garcia.

He was chosen by the Royal Opera House in London as an actor,dancer and assistant choreographer in “Carmen”  produced with the Opera House Guanghzou (China), which debuts in China June 27, 2014.

Since 2010 he worked in London with Bellydance BodyMind, overseeing the direction of the performances of belly dancing and flamenco alongside the belly dancer choreographer Claudia Massera Lewis.

At present with Bellydance BodyMind, his developing a dance fitness workout inspired by mediterranean folkloric dances.

Currently in addition to his work as an actor and dancer, Manfredi is Fitness instructor and holds  classes of Dance -Fitness and Pilates for actors and dancers where he combines a calories burn program using international and latin music.