Michelangelo Merisi,  Caravaggio, was the undisputed genius of painting in the late ‘500 and early ‘600. He revolutionized painting, with its scenes of tremendous impact plastic, almost theatrical, thanks to its technical representation with strong contrasts of light and shadows.

No painter  as Caravaggio was more individualistic.

The interesting issue is instead the movement that animates his religiosity. The important thing is how and why this belief is inextricably combines the compositional structure of paintings, with the presence of light,  the use of optical instruments, with recourse to the people as friends and loved actors of his scenes and end as it incorporates everything into a new world view, in an aesthetic, which opens a new perspective on reality.

The revolution of Caravaggio’s naturalism in his ownwork is  expressed by the subjects of the paintings and by  the atmospheres in which the plasticity of the figures is highlighted by special lighting dramatically underlines the volumes of bodies coming out suddenly from the darkness of the scene.

This show, through a highly personal interpretation of the director and the performers on stage, it won’t  to be a glorification of Caravaggio – genius, but an attempt to approach the Caravaggio-man and that his “cursed” who revealed on canvas, the artistic greatness. Cursed to himself and to those prostitutes who were often the muses of some of his famous works.

Theatre, Opera and Classical Music, Tango, Flamenco and painting in an attempt to capture the tormented soul, the sudden flash of the faith of Caravaggio, who has never believed in anything except what you see.

Only what is real is rational and also for Caravaggio, God remains unexplained.

In this extreme margin of doubt is the Greatness of Caravaggio, in the strength of what he cannot explain. 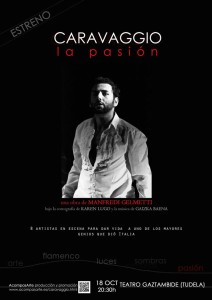 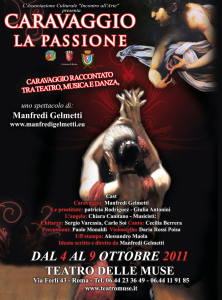